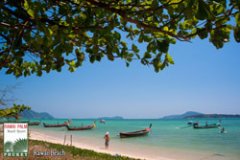 Only 200 meters to the beach in the southern tip of Phuket Island, surrounded by a secluded environment with a tranquil tropical garden, great and ideal for a family, honeymooner and holiday's seeker.

Phromthep Cape is the island's most photographed and perhaps best-known location. Every evening, large tour buses, scooters and private cars sweep through Rawai Beach and up the island's southernmost hill in order to watch the sunset at its peak. On the top of the hill stands a busy car park where vehicles disgorge crowds of people from every corner of the world. Cameras flash, fingers point and lovers cuddle as Phuket's most fabulous free show is re-enacted nightly – the sunset.

Ya Nui lies in the shadow of two of Phuket's loveliest viewpoints; Phrom Thep and the viewpoint featuring large white windmill/propeller power generators.

It's a charming little cove featuring good snorkeling, kayaking and fishing. During high season there is a line of sun loungers for hire (200 baht a set) as well as a stand that rents out masks, fins, kayaks and body boards for very reasonable prices.

At this time of year there is also an ad hoc restaurant. The sand is beautifully soft and children love to collect shells on this beach.

An island called Koh Keyao Noi stands 700 metres out in the sea and in calm weather yachts moor just off the coast and it is possible to paddle out to explore the coral or to pay a visit to neighbouring Nai Harn. In rougher weather local fishermen climb the rocky promontory to cast off or simply brave the waves with casting nets.

Nai Harn is one of the island's most popular places with in-the-know locals. This relatively tranquil place has only a few hotels including the The Royal Phuket Yacht Club and is a popular anchorage for boats during the high season. 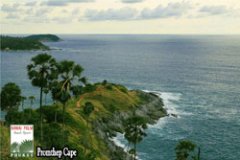 Great for swimming from November to April, care should be take in the low season (May-October) when there can be strong undertows. The local restaurants just above the beach make a great place to relax with a sundowner.

Further south is Ya Nui, a sandy cove that attracts snorkelers and divers. Another out-of-the way spot nearby is the tiny beach of Ao Sane, a great spot for snorkeling, reached by taking the road that starts at The Royal Phuket Yacht Club car park.

The Seashell Museum near Evason Resort in Rawai contains and displays valuable seashells from all over the world. Many are among the most sought-after by collectors and are from Phuket and Thai waters. It's a perfect attraction to keep kids and adults entertained on a rainy day. The museum is very well put together and is located in the basement of the large building. It has four main exhibitions, all with information in both English and Thai. The entry fee is reasonable. 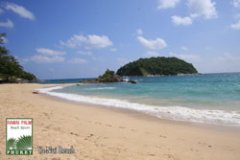 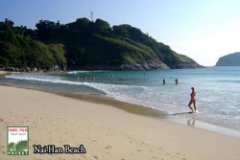 Source: www.rawaipalmbeachresort.com
Related Posts
Categories
Latest Stories
places to go near Phuket Use Scan QR Code to copy link and share it Join our list Love Thailand...
kata beach Phuket thailand My place is close to great views. You’ll love my place because of the views...
We are supported What does pending mean How to test for mold exposure How to wash your face?...
things to do Patong 1. Hit the white sand beach together Patong beach highlights a gorgeous...
Top attractions in Phuket Phuket is Thailand’s largest island. It’s a popular spot for many tourists...