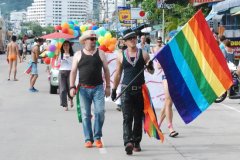 With the Songkran New Year celebrated nationwide, April is a festive month in Thailand, Phuket included. But the Phuket party continues to rock past the Songkran days of April 13-15 right to the end of the month with the week-long Phuket Pride gay festival set to run from April 22 to 28.

Thai society in general is tolerant of homosexuality and Phuket, along with, is the most welcoming place of all for lesbian, gay, bisexual and transgendered (LGBT) people. Possibly a first for Asia, support for gay travel has even reached official levels, with the Tourism Authority of Thailand this year launching a new campaign to attract LGBT visitors called Go Thai Be Free.

The Phuket Pride festival has been held every year in one form or another since 1999. New organisers, the Phuket Loves You Club, took over the event last year and since then it’s been held in April. The theme for this year’s Pride week is Same Same NOT Different.

In tandem with Phuket Pride is a fundraising effort with proceeds going to a number of local charities. Among them is the Life Home Project, which helps primarily to improve the situation of HIV-positive women and their children in Phuket. Last year, Phuket Pride raised 300, 000 baht and the goal for 2013 is one million baht. 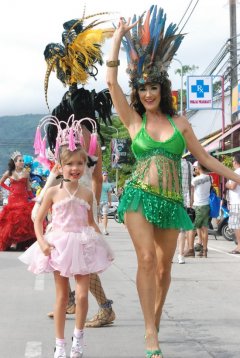 Most of the festival action takes place in Patong beach, which has a thriving gay-oriented entertainment industry, and the local municipality is supportive of the event. Those looking for a gay nightlife scene in Phuket will find it year round here, mainly in the Soi Paradise area of Patong.

Organisers estimate some 30, 000 people came to watch Phuket Pride’s grand parade last year, the main attraction during the week. With many parade participants decked out in copious amounts of feathers, sequins and glitter, it’s certainly a crowd-pleasing, colourful spectacle. The parade starts on Soi Tan, Patong, at 16:00 on April 27.

Throughout the week there will be a volleyball tournament, five-a-side football, a ‘Mr Gay Fongkaew’ pageant and street parties on Soi Paradise. Other highlights include big stage events on April 26 and 27 at the football field along the Patong beachfront, with international DJs, Thai shows and live bands, plus stalls offering food, drinks and games. Find a full schedule of events on the Phuket Pride website.

If a splashy Songkran and flashy gay festival is still not enough party action for you, Phuket has yet another event up its sleeve in April. Just before the rainbow flags start flying in Patong, the resort town makes way for black leather, choppers and chrome — wedged between Songkran and Phuket Pride is the annual Phuket Bike Week festival. This year it’s on from April 14 to 21. Expect to see (and hear) loads of Harleys and other big bikes roaming the streets of Phuket that week.

Source: www.travelfish.org
Related Posts
Categories
Latest Stories
places to go near Phuket Use Scan QR Code to copy link and share it Join our list Love Thailand...
kata beach Phuket thailand My place is close to great views. You’ll love my place because of the views...
Phuket activities for couples 4.4 (20 votes) What are the most romantic things to do in Phuket? Don’t...
things to do Patong 1. Hit the white sand beach together Patong beach highlights a gorgeous...
Top attractions in Phuket Phuket is Thailand’s largest island. It’s a popular spot for many tourists...